What is Brandy de Jerez? (English)

What is “Brandy de Jerez?”

Brandy de Jerez is an alcohol wine-spirit that is produced in only one area of the world – here in Andalusia, Spain (more specifically, within the “Sherry Triangle” that lies within the municipal boundaries wher

e we live – Jerez de la Frontera, El Puerto de Santa Maria, and Sanlucar de Barrameda).  There are references, in old Spanish documents, to a “Wine-Spirit Tax” which date back as far as 1580.

The name “brandy” is derived from a Dutch word which means “burned wine.”  Brandy de Jerez is produced by distilling wine and grapes, and generally contains 35–60% alcohol per volume.   The origin of brandy in Spain is clearly tied to the development of the distillation process.  There is no doubt that the Moors (who, in the year 711, invaded Spain at a point very near to the town of Jerez) introduced the technique of distillation to the Western world.  The Moors distilled the wines found in the Jerez region in order to obtain “alcohol” (a word of Moorish origin) not only to make perfumes but also for antiseptic and medicinal use.  The town of Jerez was later re-conquered by King Alfonso X “The Wise” in 1264.

After distillation, and transformation into a “wine spirit,” the Brandy de Jerez is then aged in oak-wood casks, known as “botas,” all of which have previously contained various types of  Sherry wines.  This is a key factor in the production of Brandy de Jerez since this type of aging allows the natural development of properties relating to color, bouquet, and taste to be imparted to the brandy by the wine-soaked wood. Also, prolonged aging produces a smoother taste sensation.  For similar reasons, these Sherry wine “botas” are also used to age the most select whiskeys in Scotland. According to tradition, American oak from the Appalachian Mountains is generally used since it is less porous than other oak woods.

Criaderas and Solera – is the name given to the traditional aging system utilized in the Jerez region.  It is unique in the world and is the system that has been used to produce wine in the Jerez region for centuries.  It is also the system which local wine producers use in order to age their brandy. It basically consists of rows of brandy casks grouped according to the age of the brandy. The casks are set out in rows placed one on top of the other.  The bottom row, which rests closest to the ground, is known as the Solera.  The word “solera” is derived from the Spanish word “suelo” which means “floor.”  The casks in the Solera contain the oldest brandy and are followed, in order of decreasing age, by the casks which make up the different “Criaderas” (the first, second, third…).  It is the brandy contained in the Solera casks which is periodically extracted when required for bottling, but only a small amount is taken from each cask. This operation is known as the “Saca” (the extraction). 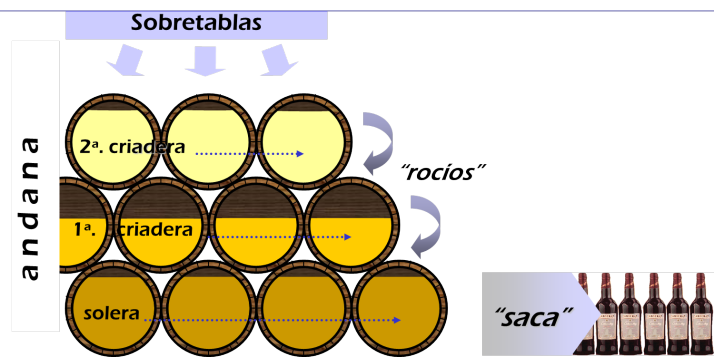 The amount of brandy withdrawn from these casks is replaced by an equal quantity taken from the casks in the row above, known as the First “Criadera” (Spanish for “nursery”). In turn, the volume withdrawn from this row is then replaced by an equal quantity from the Second Criadera, and so on.  The final Criadera, which is at the top row of the stack of barrels, is ultimately reached, and it is here where the youngest distilled brandies are deposited to replenish the system.  This replenishment of wines in each Criadera is known as the “Rocio.”  By using this fractional aging system it is possible to maintain the identical quality,  characteristics  of taste, and bouquet for each type of brandy. The quantities taken from each one of the casks in the Solera row, generally less than ¼ of its total content, are combined and then bottled.  This constant movement of the brandies between the Criaderas and Solera facilitates greater aeration and oxidation of the brandy, thereby enhancing its aging. It is also important to point out that this continuous blending process ensures that the small portion of the Solera which is bottled will ensure that what is bottled contains proportions of very brandy which can sometimes be as old as sixty years. The only disadvantage of this system is its complexity and its elevated cost. Current annual production of Brandy de Jerez is around eighty million bottles per year, of which more than twenty million are exported.

In addition to the quality-rating system, Brandy de Jerez has a legally-protected “denomination of origin.” A “denomination of origin” is awarded to a food or drink product whose main characteristics are acquired due to its production in a determined geographic area. In the case of Brandy de Jerez, its main characteristics are acquired due to the fact that it is produced and aged in the wine-producing region which is referred to as the “Sherry Triangle.”

In the past, and prior to the establishment of the denomination of origin for Brandy de Jerez, the word “cognac” was sometimes used in Spain to refer to Brandy de Jerez.  However, Brandy de Jerez should not be confused with French “Cognac” or “Armagnac.”    Although both are brandies and are produced in an almost similar fashion as Brandy de Jerez, both “Cognac” and “Armagnac” have their own legally-protected denomination of origin.  Accordingly, “Cognac” is the exclusive name used for brandy produced and distilled in the Cognac area of France, and the name “Armagnac” is used for brandy from the Gascony area of France.  They both also have a traditional quality rating system, which are often indicated on the bottles with initials such as A.C., V.S, V.S.O.P., and X.O.