The Doñana Nature Reserve includes both the Doñana “National Park” and the Doñana “Natural Park.”  It is an area located very close to where we live – right across the Guadalquivir River from the towns of Sanlucar de Barrameda and Chipiona.  It is so large that it is situated within the two nearby provinces of Huelva and Seville. It covers 543 km2 (@ 210 square miles), of which 135 km2 (@52 square miles) are considered a protected area.  The area includes marshes, shallow streams, and sand dunes in “Las Marismas,” the delta which was created naturally as a result of the Guadalquivir River flowing into the Atlantic Ocean. The area is named after “Doña Ana” de Silva y Mendoza, the wife of the seventh Duke of Medina-Sedonia.  (The word “Doña” is a respectful way of addressing or making reference to a married or older woman in Spain.  Over the years the two words, “Doña Ana,” have been melded together to create “Doñana.”) 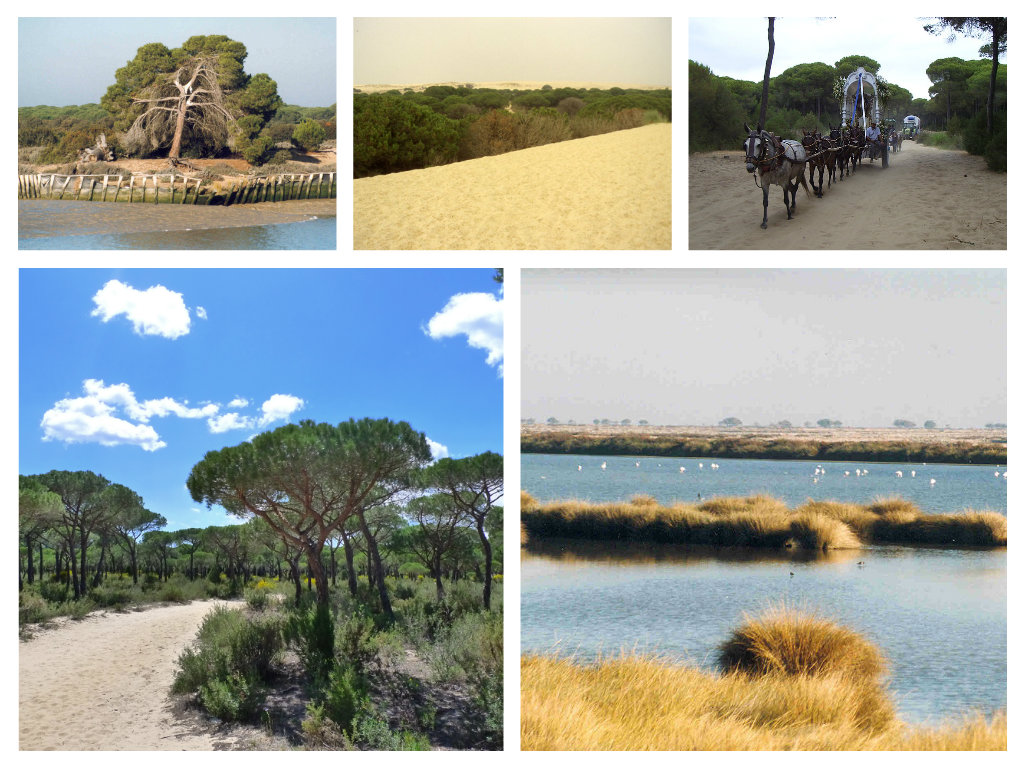 Doñana National Park has a biodiversity that is unique in all of Europe. The park features a great variety of ecosystems and also provides shelter for wildlife including thousands of European and African migratory birds, fallow deer, Spanish red deer, wild boar, European badgers, the Egyptian mongoose, and endangered species such as the Spanish imperial eagle and the Iberian lynx.

The Nature Reserve was established in 1969 when the World Wildlife Fund joined with the Spanish government and purchased a section of marshes in order to preserve them.  The National Park was created in 1989, and expanded in 1997. Due to its strategic location between the continents of Europe and Africa and its proximity to the Strait of Gibraltar, Doñana’s large expanse of salt marsh is a breeding ground as well as a transit point for thousands of European and African birds (aquatic and terrestrial).  It hosts many species of migratory waterfowl during the winter, typically up to 200,000 birds. Over 300 different species of birds may be sighted there annually.  It is considered to be the largest nature reserve in Europe.

Approximately 6,500 to 7,000 years ago, the park and the surrounding areas were flooded, and a lagoon, later called Lacus Ligustinus by the Romans, was formed.  Various ancient civilizations have had a presence there, some dating back as far as 2,800 years ago, including the Phoenicians, the Greeks, and probably the Tartessians. In 2011, an archaeological team claimed to have found, in Doñana National Park, strong evidence for the location of what remains of the city of Tartessos.  This conclusion was based on underground and underwater surveys and on the interpretation of the archaeological site at Cancho Roano as a “memorial city” which was rebuilt in the image of Atlantis.  In a documentary film created for the National Geographic Channel, it was stated that the biblical Tarshish (which some believe to be the same as Tartessos) was, in fact, the lost city of  Atlantis. The river known in the past as the Baetis is now known as the Guadalquivir.  It is thought that Tartessos may be buried under the shifting wetlands where the Guadalquivir has deposited its effluent for eons. 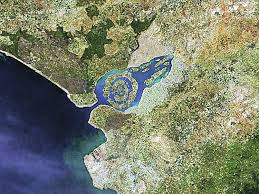 Whether the theory, that the lost city of Atlantis is buried nearby, will be proven remains to be seen as archaeological studies continue.  There is no doubt, however. that this area has been utilized for centuries.  As early as the 13th century, the area was used as a royal hunting preserve by King Alfonso the Wise and his son Guzman the Good.  In the 14th century, Alonso Pérez de Guzmán, 7th Duke of Medina Sidonia, and commander of the Spanish Armada, purchased part of the land. His wife, Ana de Silva y Mendoza, moved to a country retreat there and called it “El Coto de Doña Ana” (Doña Ana´s Game Preserve), which is the origin of the current name “Doñana.” Subsequently, the area remained in the hands of the Royal House of Medina-Sidonia for over six centuries.

rested in preserving its ecosystems, birds, and other wildlife.  He invited ornithologists from all over Europe to visit. In 1952, some Spanish ornithologists who visited the property became aware that the wetlands, with their richly diverse wildlife, were to be threatened by proposals to drain them for farming and for the planting of eucalyptus trees. In November of 1953, Mauricio, together with his father and one of the 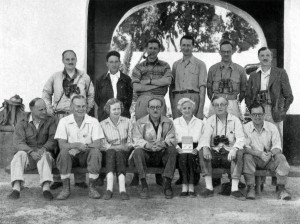 Spanish ornithologists, were able to convince the then Spanish government to protect the area due to its exceptional ecological value. The group also sought and obtained international support for their goals by demonstrating the crucial importance of the area as a stopover for birds migrating between the European and African continents. (photos by SEO/ BirdLife)

In 1493, the Catholic Monarchs, Ferdinand and Isabella, donated a small part of the land in the present village of El Rocío to their royal secretary, whose son later sold it to the town of Almonte, where the Virgen del Rocio is presently located.  The municipality of Almonte, which is located within the boundaries of the park, is situated in an area in which public manifestations of religious fervor have been frequent throughout the centuries. After the reconquest of the area in 1262, displays of devotion to the Virgin Mary were institutionalized and frequent. 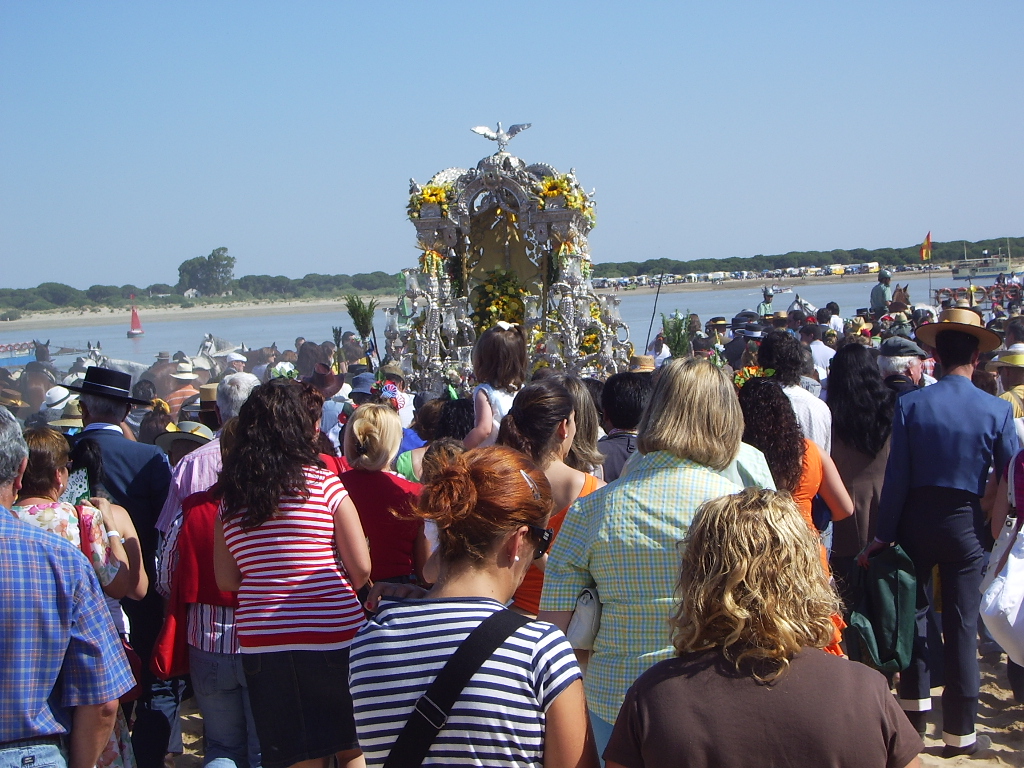 Every year, in the early part of the summer, the Doñana National Park is traversed by persons on foot, on horseback, by wagon, and in SUV´s, participating in the annual pilgrimage to the village of El Rocio, near the town of Almonte.  The popularity of this pilgramage to honor the Virgen del Rocío has raised concerns, in modern times, about its effect on the natural state of the park.  Since this event is attracting a million pilgrims annually, it is clear that it will  eventually have a negative impact on the park’s eco-system. The overcrowding of pilgrims is evident not only in the village of El Rocío where the shrine to the Virgin is located, but also in places within and outside the park

Another important activity of longstanding association with the park is La Saca de las Yeguadas (“The Gathering of the Mares”), a livestock event pertaining to the indigenous wild horses of the salt marshes of Doñana. In Doñana, there are two indigenous breeds of horse: the marsh horse and the Retuertas horse; the latter is one of the oldest European breeds, dating back to approximately 1000 BC.  It lives in the wild and is isolated from other equine populations. Every year, on the 26th of June, after the Feast of St. John the Baptist is celebrated, mares and new foals among are gathered up in a traditional roundup.

To find out more about the Doñana National Reserve, a good place to start is at The Ice House Visitors Center or at the Bajo de Guia Visitors Center.  Both are located in Sanlucar de Barrameda in the area known as the Bajo de Guía, which is alongside the Guadalquivir River.   Near the area, is the dock for the Real Fernando, a boat that takes visitors up the River Guadalquivir to the town of La Plancha, where marshland cabins and natural observatories can be visited.  For more information, in English, on the Doñana boat trip up the Guadalquivir  visit www.visithuelva.com/activities/activity.asp?Id=224362 .