HOODS AND ROBES DURING SEMANA SANTA

When I was stationed here, about twenty-some years ago, …. my first reaction to seeing hordes of robed and hooded persons parading about every Spring was not a good one since I immediately associated them with a very unpleasant aspect of our history which I won´t mention further.  I was, however, intrigued since I did know that they were associated with Semana Santa (Holy Week) but I did not know who they were, nor why they were dressed that way.

Like many things here in Spain, there is not a simple explanation for this curious aspect of the Semana Santa celebration.  Spain is a country that maintains many traditions that are tied to the Catholic religion.  Those traditions are celebrated with heartfelt devotion by some, and as “just another holiday” by others.  The groups that are dressed in hoods and robes I would classify as the former.  They are members of Cofradias or Hermandades (Brotherhoods) which are dedicated to honoring a particular depiction of Christ or the various images of the Virgin Mary.  Apart from organizing the annual procession of that statue or image during Holy Week, some of them also engage in completing a personal penitence which takes the form of accompanying the statue or image while solemnly contemplating their sins.

At one time, these brotherhoods were secret societies whose memberships were limited to males.  They no longer are secret and many are also open to men and women.  During the procession, however, the typical conical hoods cover the faces of the participants so that the public cannot identify the persons who are engaging in the penitence.  My understanding is that, in this manner, the person´s display of devotion and remorse truly remains a personal matter and not a public one. 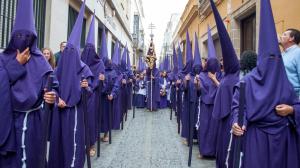 The Nazarenos, as the procession participants are called, are distinguished between those of the Cofradia who are showing their devotion  by accompanying the image, and those who are engaging in some form of penitence ( the Penitentes).  Normally the Penitentes wear a head covering that, although conical in shape, lays flat across their backs.  They might even be seen walking barefoot, dragging leg chains, or carrying a large wooden cross.  The remainder of the Nazarenos wear the conical hood that stands erect with the help of a cardboard or wire frame fitted inside of the hood.   Of course, the persons carrying the statue or  image, usually about 40 to 50, are dressed differently and are referred to as the costaleros (porters or carriers).  Throughout the procession, only their feet are visible.  There are also members that help guide the procession.

Cofradías and can vary from plain white or black cotton material to very elegant color combinations of forest green or royal blue velvet.  Each cofradía will also have their organization´s emblem emblazoned upon their robes.

A curious thing that you might see during the processions are the number of children asking a Nazareno for a piece of candy.   This, I believe, does not have any religious significance and is something which has become incorporated into the celebration since children are often an integral part of any Spanish celebration.  Children will also be seen requesting drippings from a Nazareno´s candle in order to add to the formation of what ends up being a large ball of wax.  Actually, much of the wax ends up falling on the streets.  In Sevilla, you can usually tell that a procession has passed by on a particular street when you see horses, pulling their carriages, and often losing their footing because of the slippery condition created by those wax drippings.  (Fortunately, the horses usually recover their balance)

I guess like everything else in the world, a deeper understanding of things allows us to better appreciate what we see.  Our first reactions should always be tempered with reason.  I now see hoods and robes, during Semana Santa, as something else.